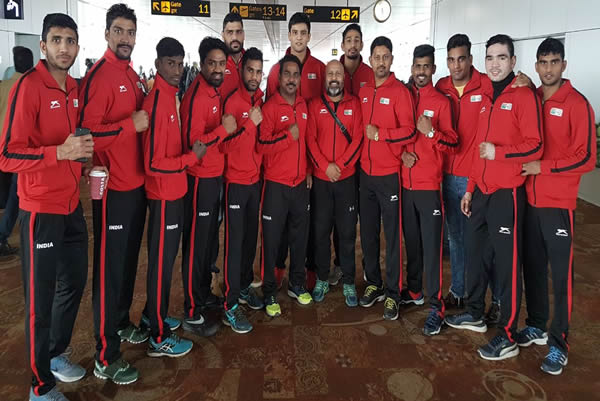 Indian boxers clinch three gold, one silver and one bronze in Kazakhstan

Manish (60kg) and Mandeep (75kg) also put up stellar shows to pocket a silver and a bronze medal each to give the country another rich haul of five medals in an international tournament.

The team’s first gold came through Shyam Kumar, who simply didn’t give any chance to local boy, Turkbay.  He punched his way to glory, to set the ball rolling for India. Asian Games bronze medalist Satish Kumar (+91kg) then steamrolled past Baeshev to bring home the team’s second gold.

Nineteen-year-old Naman (91kg), however, towered over everybody as he not only won the gold but also earned himself the accolade of being the ‘best boxer’ of the tournament.

However, another discovery during the recently held National Championship, Manish Kaushik (60kg), who beat the highly decorated Shiva Thapa in his final bout to seize the gold, lost to Rahimov of Uzbekistan to settle for silver.

And in the semifinals of the prestigious tournament, Commonwealth games silver medalist Mandeep Jangra’s gallant fight against Manashev in his maiden international tournament couldn’t help him emerge victorious as he lost out on points and ended his campaign with a bronze.

The Indian team finished the competitive tournament which had 154 boxers in fray which included five international teams and 15 local teams, with three golds, a silver and a bronze apiece.

The Boxing Federation of India (BFI) is recognised by AIBA and the Ministry of Youth Affairs and Sports, Government of India (GOI) as the nodal body responsible for the development and promotion of Olympic-style boxing in India. BFI has hosted six national tournaments in last one year, attracting over 300 boxers in each of the championships. It has hosted the AIBA 1-star course R&J certification course and seminar as well as the AIBA Cutman course this year. BFI, in association with AIBA and SAI, is also setting up a world-class boxing academy at the Indira Gandhi Indoor Stadium, New Delhi. It also plans to start 8 satellite academies across the country. BFI is also organising for the first time the AIBA World Youth (Women) Boxing Championship from November 19, 2017 and BFI will also host the prestigious AIBA Women’s World Championship in 2018 and the AIBA Men’s World Championship in 2021.