Home » Shashi impresses; Shamonova in a class of her own

Shashi impresses; Shamonova in a class of her own 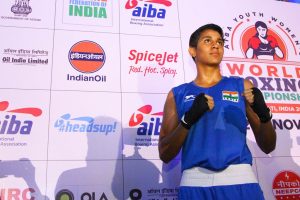 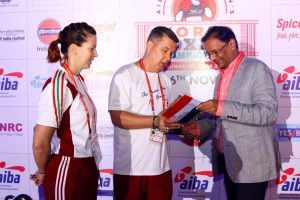 Guwahati, November 20: Day two of the AIBA Women’s Youth World Championships started for India on a grand note when Shashi Chopra who recently picked a silver at the Ahmet Cormet boxing tournament in Istanbul,came out strongly in her feather weight preliminary round at the Nabin Chandra Bardoloi Indoor stadium here in Guwahati on Monday.

Shashi was head and heels over her Uzbekistan opponent Rakhmatova Durdonakhon all through the three round. Shashi’s straight punching as she led with her left, using the double jab combo followed by a three-punch left-right-left burst seemed to keep her Uzbeki opponent on the back-foot in the opening round.

The Inter-University best boxer then stepped up her game in the second round, putting further aggression into her attack as she bobbed and weaved her way in and out of Rakhmatova’s reach. However, the Indian was unable to avoid some of the punches her opponent threw at her but that did not cause much damage as few were on target. Shashi managed to connect a vicious left hook that caught the Uzbek on the right temple that got her the standing count, seconds before the bell.

Shashi continued her attacks, keeping it simple with straight jabs short bursts in the final round to eventually take the bout away for a unanimous points decision.

“I am very happy with my first round victory. I was confident I could win the bout if i stuck to the plan and not allow my opponent to score points. I also kept my punches straight and struck effectively,” said Shashi later.

However, the most awesome display of boxing came from middleweight title contender Shamonova Nastasiia. The sturdy Russian showed why she is amongst the most feared boxer in women’s world boxing. She looked to be in a class of her own as she demolished USA’s Moreu Sharahya with such clinical punching that all the American could do was soak in the pain but courageously soldiered on, sometimes connecting with power to the head and stomach, reminding the Russian that she was no pushover.

The final outcome was a unanimous victory for the Russian and a round of applause from the crowd.

The Boxing Federation of India (BFI) is recognised by AIBA and the Ministry of Youth Affairs and Sports, Government of India (GOI) as the nodal body responsible for the development and promotion of Olympic-style boxing in India. BFI has hosted six national tournaments in last one year, attracting over 300 boxers in each of the championships. It has hosted the AIBA 1-star course R&J certification course and seminar as well as the AIBA Cutman course this year. BFI, in association with AIBA and SAI, is also setting up a world-class boxing academy at the Indira Gandhi Indoor Stadium, New Delhi. It also plans to start 8 satellite academies across the country. Under the stewardship of the president, BFI is also organising for the first time the AIBA World Youth (Women) Boxing Championship in November, 2017 and the AIBA World Boxing Championship in 2021.

“It was the chief coach’s strategy (Raffaele Bergamasco) to use the left-right and three-punch combinations in short bursts. We told Shashi to stick to the plan and not drop her guard and all would fall in place,” said Abhishek who is with the team.