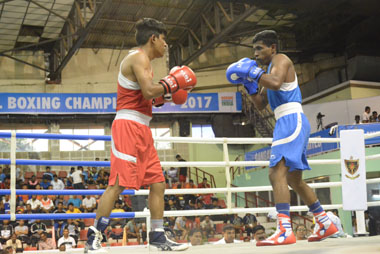 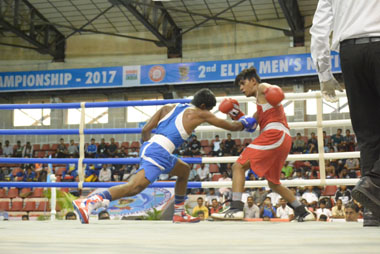 Over 300 boxers, including the country’s top pugilists like former World Championship Bronze medalist Shiva Thapa and former Commonwealth Gold medalist Manoj Kumar, will fight for top honours in the Second Elite Men’s Boxing National Championship that gets under way here on Wednesday.

The blue riband event of Indian boxing was inaugurated by Dinesh Gayen, member staff of Indian Railways and President of RSPB, President of Boxing Federation of India (BFI) Ajay Singh and Secretary of RSPB Rekha Yadav, here at the Swarna Bharati Indoor Stadium on Tuesday.

“This is the second edition of Elite Men’s National Championship and I am sure like the first edition of the Championship, lot of new talent will be identified in this platform,” BFI President Ajay Singh said at the glittering opening ceremony. “The participation of 309 boxers from 37 states and sports promotion boards of the country shows how important this tournament is for the boxers and I am sure this Championship will provide the right platform for many more champions to emerge. I am thankful to the Railway Sports Promotion Board for organising the Men’s National Championship and for extending their support for the promotion of boxing in the country.,” he added.

The first edition of this tournament was successfully held in Guwahati last year; it is being held with support from RSPB in Visakhapatnam, a city that has produced legends such as Dennis Swamy for the country in the boxing ring.The week-long Championship will feature 37 teams, including state associations, and will see a solid 309 boxers looking for medals and a place in the national squad.Leading the Railways team charge will be Manoj Kumar and he was delighted to see boxing being streamlined once again.

“We had a rough time for very long as we didn’t even have a governing body. But now, under the guidance of Ajay Singh, a number of young boxers are coming up the ranks and for the first time in our country’s history we are getting to host global events in our own backyard,” he said.

All eyes will be on Assam’s Shiva (60 kgs), who won a silver at the Asian Championships in 2017. He always believes that it is necessary to participate in national tournaments to sharpen one’s skills.

“This is the biggest domestic tournament for us and will give many of the upcoming boxers immense exposure. This will also be a good opportunity for all of us to reflect on our performances,” Shiva said.

“Each tournament is important to me and I will look to replicate my gold winning performance from last year,” the champion concluded on a positive note.