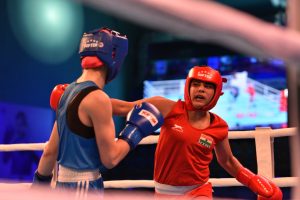 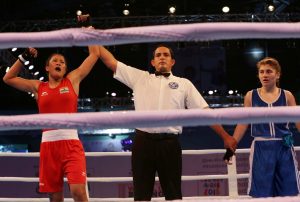 Guwahati, Nov. 21: India had a brilliant day in the AIBA World Women’s Youth Boxing Championships here on Tuesday, with all five boxers who stepped into the ring winning and advancing to the quarterfinals.

Haryana’s dynamo Jyoti and local girl Ankushita were a revelation as they displayed their skill and class against tougher opponents.

Shashi treaded cautiously in the opening round, gauging her opponent Lin Li Wei-Yi’s strengths and weaknesses. But once she figured her out, she made it seem like another workout in the gym.

She eased into her rhythm, shuffling in the centre of the ring and pummelling her opponent at will. She threw straight punches in ones and twos, cleanly striking her target on the jaw, head and midriff. She picked up points in style to the delight of her fans.

The boxer to impress, however, was local girl Ankushita. She was clearly the most accomplished and stylish boxer of the session. Such was her class that her opponent, Cagla Aluc of Turkey will remember her demolition for a long time in the welterweight category.

The Bodo girl demonstrated not just strength and power but footwork and fists of fury too. It was sweet revenge for her as well as Cagla the European champion, had beaten Ankushita in the Ahmet Comert International Boxing tournament in her own country in Istanbul, Turkey last month.

High-performance director Rafaele Bergamasco changed Ankushita’s strategy for this rematch after the setback in Turkey. It paid dividends as Cagla just did not know what hit her, right from the moment she stepped into the roped square till the bell went off for the first time.

Ankushita trained extremely hard for this and relished every moment in the ring.

“She beat me in her country, so it was only natural that I had to return the compliment in my country,” Ankushita said.

Nitu got the better of Bulgaria’s Emi-Mari Todorova while Sakshi had to dig deep to overcome Indira Shudabaeva of Russia in the evening session.

Nitu was delighted after her victory. “It was an easy bout for me. I had beaten her earlier in Bulgaria too and I knew how to tackle her,” she said. “She didn’t allow me to move freely in the first round and my coach changed my strategy midway that made all the difference,” she added.

“Our strategy was to go with combination punches because she plays on the counter,” Sakshi said. “I could have done better but I am satisfied with the bout,” she added.

Jyoti too boxed with conviction, using the straight jab, left hook and throwing her right punch straight from the shoulder to rattle her strong and aggressive Ukraine opponent.

USA’s popular flyweight boxer Garcia Heaven Destiny probably never expected that her opponent Kim would make hell for her. The Korean came out with loads of aggression and staccato punches to surprise her.

Fortunately, Heaven steadied herself by the second and consolidated her position in the final round to come out unscathed. Even though she pulled through, the victory lacked conviction.

“I will do better in my next bout. Things did not go the way I planned it out,” said the American girl later.