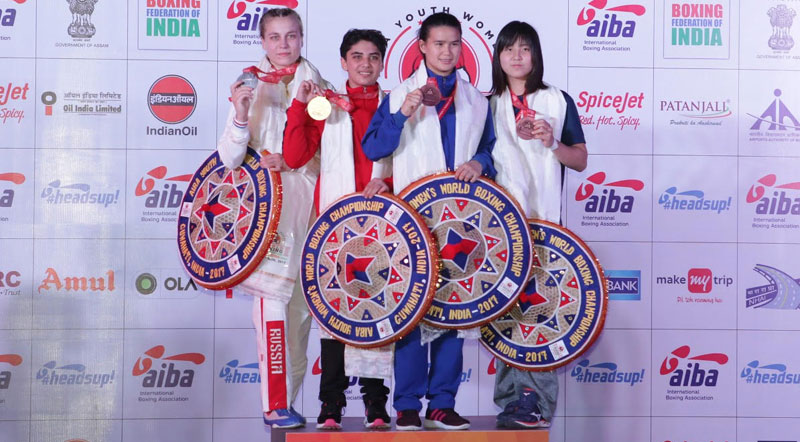 51 kg. Rohtak, Haryana
Winner of the 2017 AIBA Youth Women’s World Championship
31st International Ahmet Comert Boxing Tournament, Istanbul-Silver
6th Golden Glove women’s Boxing Tournament, Serbia- Gold
National Games, 2013-Silver
Typically, Jyoti’s parents were against the notion of her becoming a boxer. But her village sarpanch showed exemplary vision and courage, and even helped with her initial training and practice.
Jyoti, of course, had to lie to her parents to make that happen. She used to sneak out on one pretext or another and don her boxing gloves. One thing led to another and she was seen competing in tournaments in Rohtak.
It helped that just around that time, one of her neighbours’ sons had won a gold medal in a local competition. She was filled with envy and desire and it proved to be a turning point in her life. She decided to not only take up boxing as a career option but also set herself the goal of making it big in sport.
Jyoti soon began to win local championships. Her conservative farmer parents were still unaware of their daughter’s prowess or progress though. It was in 2012 when she was selected to participate in the State Championship that she had to out her secret.
Her parents were expectedly very unhappy. But she still went and won the tournament. A new chapter in Jyoti’s life had begun.
A Mary Kom fan, her fan moment was fulfilled when she met and trained along with the champion boxer at the IG Stadium in Delhi. Jyoti loves to dance and that’s what she did at the AIBA Youth Women’s World Championships: danced to the title. Jyoti was at her imperious best and she steamrolled her way to the top of the podium in the 51kg competition. The win is not only the biggest win of her career till now but it also

helped her seal a spot in the Buenos Aires 2018 Youth Olympic Games.