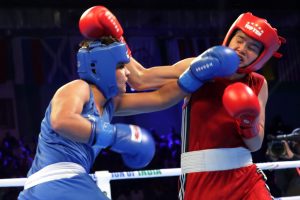 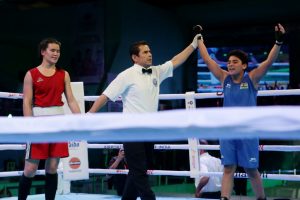 Indian boxers continued their spectacular run in the AIBA Women’s Youth World Boxing Championships here on Friday, with three of them winning their bouts and storming into the finals.

Jyoti (flyweight), Shashi Chopra (feather) and local star Ankushita Boro (lightwelter) made it seem like a walk in the park as they outclassed their opponents in front of packed stands.

The shadow-boxing drill carried out by the India’s High Performance director Rafaele Bergamasco the night before during the rest day seemed to have worked its magic.

“Jab, side-step,hook to the face. Jab, unleash the 1-2 to the midriff, Duck, move to the right, throw a straight punch from the shoulder, then move away,” he kept telling them.

“Never keep backing up. Never! Move from side to side, left or right. Never stay in one place or you become an easy target,” he kept reminding them, time and again.

On Friday, the Indian girls did just that and came up trumps.

Jyoti cleverly fought her opponent Zhansaya Abdraimova from a distance. That foxed the Kazakhstan girl who has a penchant for aggression. The minute she attempted to charge, Jyoti side-stepped her with ease and countered with a left jab followed by a two-punch or three punch combo that gave
her the edge.

However, Jyoti did slip up in the second round, slowing down a bit to allow her opponent claw back.

Jyoti returned in the third, hungry for victory. She stepped on the gas, attacking with greater vigour, mixing her attack with left jabs and short bursts with both fists, including the leapfrog hook to Zhansaya’s face.
The Kazakh girl too did her best to counter Jyoti but without much success.

Shashi Chopra turned on the heat in her feather weight bout to end the impressive run of Mongolia’s Namuun Monkhor. The lanky Indian girl peppered her opponent’s face and body with such consistency and precision, especially in the second when she unleashed a wicked left-right combo to Namuun’s face, to force the referee give the Mongolian a standing count.

The third round was a rock-solid demonstration of straight punching that saw Shashi punish her opponent with such conviction, that writing on the wall soon became apparent.

Ankushita started slowly against Thailand’s Thanchnok Saksri in their light welter category but gained momentum as the clock ticked. She slowly became aggressive, working on the face and body of her opponent to steal a huge lead.

The third round was completely hers, as Ankushita came up with speed and combination while moving from side to side even as she shuffled her feet, bobbed and weaved to avoid the punches thrown at her.

The vociferous cheering from the packed stands only egged her on and she finished the bout in a flourish, releasing a series punches to the body and face with such lightning speed that the crowd was in raptures. She even earned a bear hug from Rafaele as he could not hold back his joy.

“The bout was easy for me. I had better height and used it to my advantage to score freely,” Ankushita said later.

India’s fourth semifinalist Neha Yadav ran into a stronger opponent in Kazakhstan’s Dina Islambekova in the heavyweight division. The Kazakh was way above and too polished a boxer for young Neha who bravely fought on but couldn’t match her opponent.