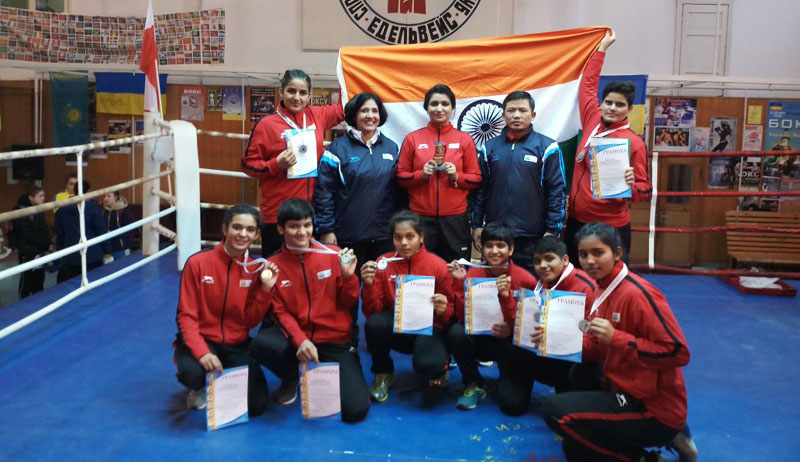 After a scintillating display by the female pugilists of the country in the AIBA World Youth Boxing Championships, the junior lot of boxers proved their mettle at the Valeria Demyanova Memorial International tournament as they returned with four gold, three silvers and a bronze to make it a rich eight-medal haul, here on Saturday evening.

The team struck their first gold with Arundhati Choudhury in the 60-kg weight category when her punch left Uljanay from Kazakhstan in a tizzy and made the referee halt the contest in the second round. After an exhilarating win the 60-kg final, Raj Sahiba (70-kg) facing another pugilist from Ukraine Petrenko Julia, punched her way to the gold in exactly similar fashion as Arundhati.

Mitika Sanjay’s final bout in the 66-kg weight category was a walk in the park for her as she single handedly left Irina Notatina, another Ukrainian, biting the dust in the second round itself. The fourth gold came in the 80-kg weight category as Komal swiftly piled the pressure on her opponent to win the bout 3-0.
Jhalak Tomar (54-kg) and Sanjeeta (48-kg) fought valiantly but had to settle for silver’s as they lost out to Ukraine’s Farhudinova Valeryia and Fabulyak Victoria respectively. Lipakshi also couldn’t stamp her authority on gold as she lost out her final bout to settle for silver.

It was curtains for B. Mounika in the semi-final round as she lost out to Setmonia Kaller to come back with a robust display at a prestigious tournament and conjure eight medals in such a staunch competition.

The Boxing Federation of India (BFI) is recognised by AIBA and the Ministry of Youth Affairs and Sports, Government of India (GOI) as the nodal body responsible for the development and promotion of Olympic-style boxing in India.BFI has hosted six national tournaments in last one year, attracting over 300 boxers in each of the championships. It has hosted the AIBA 1-star course R&J certification course and seminar as well as the AIBA Cutman course this year. BFI, in association with AIBA and SAI, is also setting up a world-class boxing academy at the Indira Gandhi Indoor Stadium, New Delhi. It also plans to start 8 satellite academies across the country. Under the stewardship of the president, BFI has also successfully organised the AIBA World Youth (Women) Boxing Championship in November, 2017 for the first time and is set to host the AIBA World Elite Women Boxing Championship in 2018 in New Delhi and the AIBA Elite Men’s World Boxing Championship in 2021.